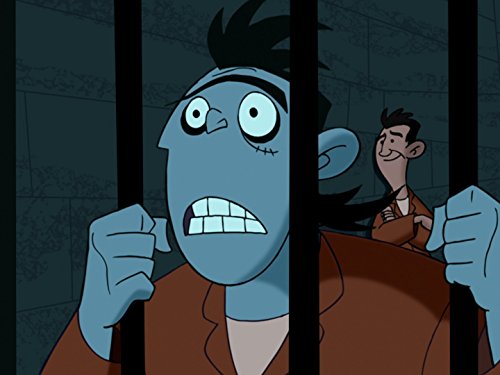 Motor Ed busts Shego out of prison (leaving Drakken behind) to help him pull off his "most awesome" plot. Meanwhile, Kim will do anything to get a car of her own... even let her brothers build one!

Bonnie gets to flaunt her new car in Kim's face, reminding her that as a senior, having your own car is highly recommended. Unfortunately, the only wheels she has is her boyfriend's Fearless Ferrett moped. This leads Kim on the pursuit of new wheels, and unfortunately, like every other basic average girl(or boy), you have very few options. When Mr. Dr. P. offers her a piece of... history called the "Roth SL Coupe," which he drove sometime before she was even born. Jim & Tim offer to help her fix it up, in return for being their personal chauffeur otherwise known as their "Car Monkey." Meanwhile, Motor Ed breaks Shego out of prison, leaving Dr. Drakken behind once again. Ed is looking to steal an incredibly dangerous rocket from the Middleton Institute of Technology, and convert it into a hot rod, and all the while he's making sure Shego is part of the plan, even going so far as to insist that she dresses like a retro-1960's girl as a "disguise." The trouble is, he never gives her a clue as to what it might be... until later, which I'll get to.

While Kim thinks Jim & Tim using her as their car monkey is interfering with her attempt to foil Motor Ed's supposedly fiendish plot, the villains show up. When Kim tries and fails to chase them down, Jim & Tim decide using her as a car monkey is no longer important. They decide to rebuild the car again, and at first it seems like more than they can handle. Some claim the new version of Kim's car looks like the Lexus prototype used in the Tom Cruise movie "Minority Report," and while that's understandable, I could swear I've seen other concept cars that look more like Kim's super car than this. Nevertheless, when Shego finally finds out what Motor Ed's "evil plot" truly is, it's difficult NOT to side with her.

Two scenes stand out in this episode. After Kim is flung through the air by Motor Ed's transforming truck, she uses a gelatin that turns into a landing cushion, which gives her a ridiculous '80s hairdo. If I were Ron, I would not only not mock her hair, I'd spend time kissing her passionately, so I could have an excuse to run my fingers through it and fluff it down for her. Then, of course there's the scene where Wade tells Kim about the hidden "Magno-rings" in the dashboard. Hearing Rufus humming "Here Comes the Bride" is priceless, and an indication that the writing team of John Behnke & Rob Humphrey, not to mention the rest of the KP Staff are milking the romantic angle of the show for all it's worth. See? I told you that you don't have to be a car freak in order to love this episode.